Today we took a day from driving and spent time with our  friend from IU – Hannah. She’s super awesome! Not only is she a talented cellist and viola da gambist but she also plays and coaches ice hockey and works at a really neat doggy daycare in Evergreen. She’s a dog person. I can relate to that. Entirely opposite of Pedro who is a crazy cat lady waiting to happen if I ever saw one. 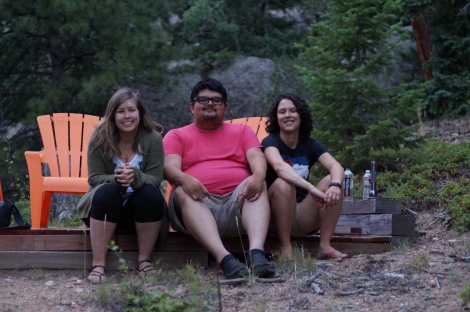 Speaking of Pedro, this trip he was without the company of his two cats and he was having withdrawals. To fill the vast black hole of loneliness left by his kitties, he set off on a quest to find a bear. A bit of a size difference to be sure, but he was determined.

Alas… the closest thing we saw to a bear all trip was an elk cow and it was unlikely that we would see a bear after we left Evergreen because we were going into Texas…. no bears there….  However… it seems that a bear stowed away in our car and it has since become Pedro’s constant companion. All’s well that ends well.

Anyways… more about Evergreen! It is a super cute little town about 45 minutes west of Denver. In the morning we had a nice lie in (the first real sleep in of the entire trip) so we were all well rested. After getting ready for the day we went to have a hearty and delicious brunch at the Country Road Cafe followed shortly by a trip the Red Rocks.

Did you know that there is a theatre built into the rock here? They have all sorts of music here from orchestral to rock. Way cool!

After a quick tour, we continued on to get some much needed groceries – more ginger for me (ginger shots and ginger chews) to help with my motion sickness along – and sweet treats for everyone. 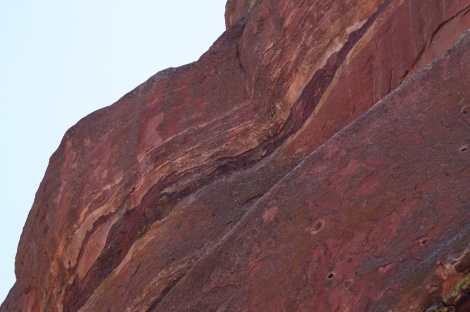 Of course, the day was not complete without a trip to a local breaewery that was situated up a hill/mountainside. It was a great view into the valley and fun to chat and have beers and appetizers/dinner.

By the time we got back to the cabin that evening, it was starting to get dark and sprinkle a tiny bit.

So we unloaded the groceries and I decorated the roof box while Hannah took the dogs out. 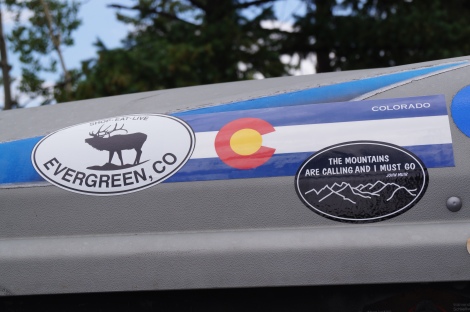 We weren’t done with the evening though!

To enjoy the sunset and the view (which is nice because the cabin is on the side of a mountain) we grabbed some drinks and walked up from the cabin a short ways to a small deck (an even better lookout!)

It was bril to hang out with Hannah! Hopefully it won’t be 3 years before we next see her!

One response to “The Return Day 4: Evergreen, CO”