So… Let me start today by telling you the story of the roof box. My family has owned the roof box we are borrowing since I lived in the UK back in 2001-06. My parents regularly bunged me and my 3 siblings in the car and we traveled all over Europe and the UK. During that time my mum started collecting country stickers to put on the box. Now, my brother Aaron uses it mostly when he goes on his many outdoor climbing trips and he has added a few state park and REI stickers. Before we left my house my mum asked me to add to the sticker collection with the stickers from states we are going to travel through. 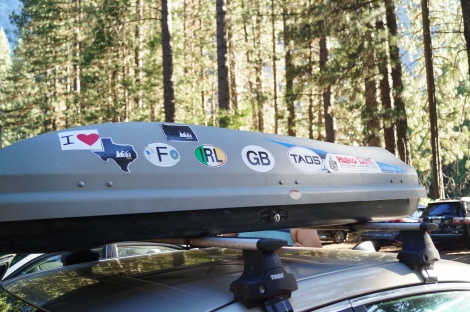 I am excited to have a mission! Yes! It feels like a real road trip when we are displaying our stickers on our travel box for all to see. It says “I love going places!” and that makes me feel great!

When we first set out to find stickers I thought “This will be easy! Every travel center has a souvenir portion and surely the visitor center right across each border has something.” Well… Let me tell you…. I could not have been more wrong! It has been the most difficult thing to track these stickers down! When did people stop buying travel stickers?! I feel like they used to be in the outside of every suitcase and guitar case! No more….

Today the sticker I found simply said “I ❤ Arizona”. I didn’t feel quite right putting that sticker on my roof box when I’m sort of ambiguous about Arizona (where the sticker that says that?) when I live in Texas and don’t even have an “I ❤ Texas” one. So I borrowed scissors at the has station I bought it at and cut off the “I ❤” and stuck it in front of the Texas shaped REI sticker and put Arizona on its own. Problem solved!

Sad to say that stickers was the most interesting part of our day.

Sorry this blog post isn’t going to be as picture filled and entertaining as other days. We didn’t really take many pictures because it was so ugly. Until you’ve seen it you don’t really understand but it’s not worth the picture. Suffice it to say, if the devil decided to sit on a portion of Arizona and California this is exactly what it would look like.

When we left Tucson it was actually quite pretty for the desert. Things seemed lush and green and there were beautiful mountains covered in saguaro cacti. That’s actually the interesting thing about Arizona – the plant life is deceptively inviting but when you get closer you realize everything has spines a mile long! Anyways…The further away from Tucson we got the more bleak things became. Mountains turned into glorified piles of rocks – some with small rocks and some with big. It got up to 114 degrees and even the cacti, which are some of the most hardy, drought, resistant plants ever, were spindly and brown. It seemed like nothing had the will to live there.

We did have two points of interest during this drive. Both of them are cool but also scary. Why they were scary: 1 – They were both super hot. 2 –  They were out in the middle of nowhere. 3 – There was not good reception. Yikes! What was Cool: The first one was sand dunes. Who knew California had legitimate dunes! As far as we could see! So neat! The second one was a large windmill field. What large machines! Pretty awesome to see. What wasn’t cool about this particular one was that once we passed through the windmill field we had to drive over these huge rock pile mountains and the temperature was ridiculously hot in the triple digits and there was a sign saying turn off your air conditioning so your car didn’t overheat. I was just praying the whole time we’d make it over! I can’t tell you how relieved we all were to start heading into San Diego after that!

The closer to San Diego we got, the more beautiful the landscape became. What a welcome sight after so much ugly! We stopped briefly to have Korean BBQ (Yum yum!) and then drove up I5 which took us on a beautiful drive up the California coast to Buena Park (which is right next to Anaheim and Disney Land – the Happiest Place on earth!) We were just happy to have made it to a prettier part of the country! Yay!

Today was the day we finally moved from I-10 to a different highway! After leaving Tucson the surroundings were getting worse and worse and the only thing I could think is, ‘Why would anyone want to live in this area?’

This is the first time that I have traveled to California and it was a glorious moment to see the return of the color green. Thank God!!! Trees, shrubs, and green grass was a beautiful thing!.

During the early part of the drive the high temperature was 112 degrees and I said to myself “I dont think so”. Upon arriving closer to San Diego the temp went down to 80 and it was AMAZING. We could finally turn off the a/c and enjoy the nice air outside.

Before arriving to California, Steph reminded us that we could not bring fruits and vegetables to into the state so about 10 miles before the border we were all eating as much fruits as we could….at least we were being healthy.

The high point of the day was arriving at Manna Korean Buffet….we finally get to eat some meat! It was a great recommendation from Steph….by now I should know to trust her recommendations when it comes to food.